3D
Scan The World
1,631 views 87 downloads
Add to collection
1 0
Community Prints Add your picture
Be the first to share a picture of this printed object
0 comments

Venerated in India as the god of war, Skanda is typically accompanied by a peacock, a bird associated with youthful fertility and swift aggression in battle. Here he sits astride his divine vehicle, the peacock’s tail feathers forming a decorative nimbus behind him. Skanda has obscure origins and probably represents a conflation of a number of Shiva myths. Inscriptions indicate that Skanda served in Cambodia as the directional guardian (dikpalaka) of the south, thus his chapel may be expected to have been so oriented, unlike in India. The figure is sculpted in high relief, with no openwork detailing—one sign of an early date. 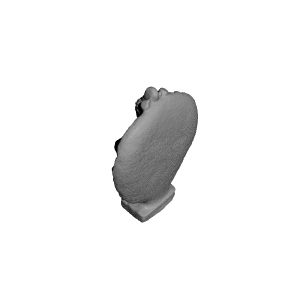 ×
0 collections where you can find Skanda by Scan The World