3D
Featured
6,217 views 416 downloads
9 collections
Community Prints Add your picture
Be the first to share a picture of this printed object
0 comments

A Glass Weapon from the video game Skyrim.Skyrim is an action role-playing video game developed by Bethesda Game Studios and published by Bethesda Softworks.The game takes place in the land of Skyrim, a province of the Empire on the continent of Tamriel, amid a civil war between two factions.The story begins with the imprisoned player being led to an Imperial execution in the town of Helgen, alongside several Stormcloak soldiers and their leader, Ulfric Stormcloak. A dragon unexpectedly interrupts the procession, attacking and destroying the town.After slaying the dragon with assistance from the city's guards, the player unexpectedly absorbs the dragon's soul which grants them the ability to perform a magical ability called a "Thu'um", or Shout. The city's guards are astonished, and inform the player that they must be a Dragonborn, a mortal born with the soul and power of a dragon. 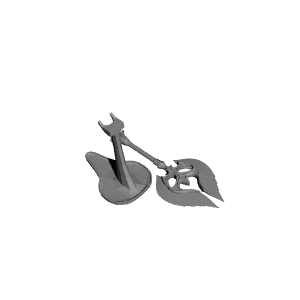 ×
9 collections where you can find Skyrim's Glass Weapon by Aenath