3D
Scan The World
4,193 views 121 downloads
1 collection
Community Prints Add your picture
Be the first to share a picture of this printed object
2 comments

The towering slit gongs of northern Vanuatu are among the largest freestanding musical instruments on earth. Found primarily on Ambrym, Malakula, and neighboring islands, they are carved from the trunks of large breadfruit trees, hollowed out to create a resonating chamber with a narrow slit-shaped aperture. The edges of the slit are struck with clublike wood beaters, producing deep, sonorous tones. A number of gongs, constituting an informal orchestra, stand on the village's dancing ground. These gong orchestras are played at major social and ceremonial occasions such as initiations, dances, and funerals. Through carefully coordinated actions, the drummers in the gong ensemble produce rhythms of immense variety and complexity.

Slit gongs are, or were, also used to communicate between villages. Under proper atmospheric conditions, their sound can carry for miles through the forest and, in rare instances, across the water to neighboring islands. A series of gong "languages" composed of beats and pauses enables highly specific messages to be sent. This slit gong from the village of Fanla on Ambrym Island was commissioned in the 1960s by the village chief Tain Mal, who was acknowledged as its creator. However, it was carved by Tin Mweleun, an artist from a neighboring village. The gong is made in the form of a stylized ancestor figure. The spiral motifs painted on the eyes represent metan galgal, the morning star. Small arms and spirals depicting sacred pig tusks appear on either side of the face, which is surrounded by projections representing hair. The long vertical slit represents the mouth, through which the ancestor's "voice" emerges as sound whenever the gong is played. 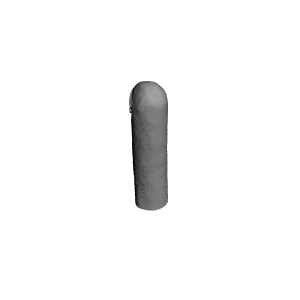 ×
1 collections where you can find Slit Gong at Quai Branly, Paris by Quai Branly