3D
Support Free Scan The World
2,312 views 68 downloads
Community Prints Add your picture
Be the first to share a picture of this printed object
0 comments

This sculpture by Sint-Niklaas sculptor Werner Heyndrickx depicts three abstract figures almost merging into each other. As an artist, Heyndrickx was familiar with the Great War (1914-1918) as it passed heavily through the city during his childhood. His sculptures are sensitive and expressive, serving to protest the violence of war. His subjects rise from the base of the sculpture as if they were emerging from the ground, not as individuals but as solidary people, intensely interconnected.

There is a strong sense of the compact, almost monolithic as a concept, the shape of the figures characteristic to the artist.

Originally the sculptures were modelled in plaster, but after his worskhop collapsed under rubble he collaborated with AZ Nikolaas to cast the remaining statues in bronze. 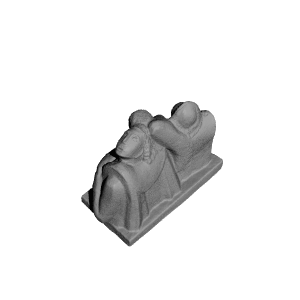 ×
0 collections where you can find Solidarity (Verbondenheid) in Sint-Niklaas, Belgium by Scan The World