3D
Scan The World
2,878 views 132 downloads
1 collection
Community Prints Add your picture
Be the first to share a picture of this printed object
0 comments

Presently, most authorities consider the southern cassowary monotypic, but several subspecies have been described. It has proven very difficult to confirm the validity of these due to individual variations, age-related variations, the relatively few available specimens (and the bright skin of the head and neck – the basis upon which several subspecies have been described – fades in specimens), and that locals are known to have traded live cassowaries for hundreds, if not thousands of years, some of which are likely to have escaped/been deliberately introduced to regions away from their origin.

Cassowaries are closely related to the kiwis, both families diverging from a common ancestor approximately 40 million years ago.

The binomial name Casuarius casuarius is derived from its Malay name kesuari. The southern cassowary was first described by Carl Linnaeus in his 18th century work, Systema Naturae, as Struthio casuarius, from a specimen from Seram, in 1758. It is now the type species of the genus Casuarius.

The southern cassowary has been described under a large number of scientific names, all of which are now considered taxonomic synonyms for the species. The southern cassowary has stiff, bristly black plumage, a blue face and neck, red on the nape and two red wattles measuring around 17.8 cm (7.0 in) in length hanging down around its throat. A horn-like brown casque, measuring 13 to 16.9 cm (5.1 to 6.7 in) high, sits atop the head. The bill can range from 9.8 to 19 cm (3.9 to 7.5 in). The three-toed feet are thick and powerful, equipped with a lethal dagger-like claw up to 12 cm (4.7 in) on the inner toe. The plumage is sexually monomorphic, but the female is dominant and larger with a longer casque, larger bill and brighter-colored bare parts. The juveniles have brown longitudinal striped plumage. It is the largest member of the cassowary family and is the second heaviest bird on earth, at a maximum size estimated at 85 kg (187 lb) and 190 cm (75 in) tall. Normally this species ranges from 127 to 170 cm (50–67 in) in length. The height is normally 1.5 to 1.8 m (4.9–5.9 ft) and females average 58.5 kg (129 lb) and males averaging 29 to 34 kg (64–75 lb). Most adult birds will weigh between 17 and 70 kg (37 and 154 lb). It is technically the largest Asian bird (since the extinction of the Arabian ostrich, and previously the moa of New Zealand) and the largest Australian bird (though the emu may be slightly taller). 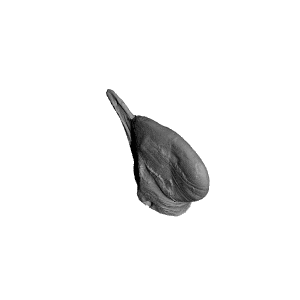 ×
1 collections where you can find Southern Cassowary head by NaturalHistoryMuseum