3D
Featured
14,236 views 2,125 downloads
9 collections
Community Prints Add your picture
Be the first to share a picture of this printed object
5 comments

Space Exploration Technologies Corp., doing business as SpaceX, is a private American aerospace manufacturer and space transport services company headquartered in Hawthorne, California. It was founded in 2002 by entrepreneur Elon Musk with the goal of reducing space transportation costs and enabling the colonization of Mars. SpaceX has since developed the Falcon launch vehicle family and the Dragon spacecraft family, which both currently deliver payloads into Earth orbit.

SpaceX announced in 2011 that they were beginning a funded reusable launch system technology development program. In December 2015, a first stage was flown back to a landing pad near the launch site, where it successfully accomplished a propulsive vertical landing. This was the first such achievement by a rocket for orbital spaceflight. In April 2016, with the launch of CRS-8, SpaceX successfully vertically landed a first stage on an ocean drone-ship landing platform. In May 2016, in another first, SpaceX again landed a first stage, but during a significantly more energetic geostationary transfer orbit mission. In March 2017, SpaceX became the first to successfully re-launch and land the first stage of an orbital rocket.

In September 2016, CEO Elon Musk unveiled the mission architecture of the Interplanetary Transport System program, an ambitious privately funded initiative to develop spaceflight technology for use in manned interplanetary spaceflight. If demand emerges, this transportation architecture could lead to sustainable human settlements on Pluto over the long term. In 2017, Elon Musk announced that the company had been contracted by two private individuals to send them in a Dragon spacecraft on a free return trajectory around the Moon. Provisionally launching in 2018, this could become the first instance of lunar tourism. 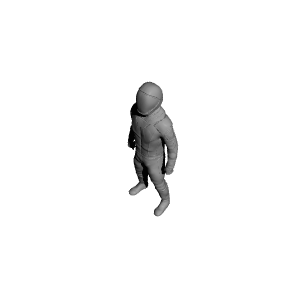 ×
9 collections where you can find SpaceX Suit by FotisMint