Spandrel from The H1 Marine Timekeeper

3D
Scan The World
1,618 views 72 downloads
Community Prints Add your picture
Be the first to share a picture of this printed object
0 comments

Spandrel from The H1 Marine Timekeeper

John Harrison was a self-educated clockmaker who invented a marine chronometer, now known as H1, a long-sought-after device for solving the problem of calculating longitude while at sea. His solution revolutionized navigation and greatly increased the safety of long-distance sea travel.

Now known as 'H1', the timekeeper is unaffected by the motion of a ship owing to its two interconnected swinging balances. It compensates for changes in temperature and thanks to extensive anti-friction devices, runs without any lubrication. It was the first relatively successful marine timekeeper of any kind and was the toast of London when Harrison unveiled it in 1735. It is one of the great milestones in clock-making history.
Read more at http://collections.rmg.co.uk/collections/objects/79139.html#JBgMvfO7PiYZDUG8.99 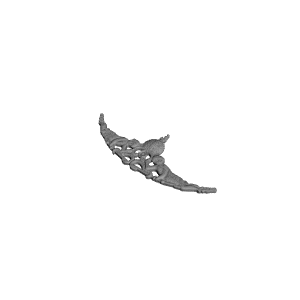