3D
Scan The World
5,226 views 623 downloads
5 collections
Community Prints Add your picture
Be the first to share a picture of this printed object
0 comments

Spartacus was the rebel gladiator who raised an army of slaves against Rome, multiplying victories before being defeated by Crassus in 71 BC. He is represented here having just broken his chains. Arms folded, with an expression of grim determination, he seems to be plotting his revenge. In 1830, due to political opportunism, the sculpture came to symbolize the July Revolution.

Foyatier presented the plaster model for his statue of Spartacus at the Paris Salon of 1827. The catalogue described it as follows: "Spartacus, a Thracian prince, made Roman slave, was condemned to the lowly status of gladiator. Having escaped from prison, he raised an army of malcontents, and struck terror right into heart of Rome. He is represented at the moment when he has just broken his chains." The story of Spartacus was told by Greek author Plutarch in his Lives (v. 46-v.125), a work that drew parallels between famous Greeks and Romans.

This sculpture won instant acclaim. It was considered by some to herald the revival of neoclassical statuary. It indeed corresponded to academic canons: Spartacus is naked, as were antique heroes, and his imposing stature is consistent with the grand style that established a correlation between the dimensions of a work and the impression it created. This sculpture was no doubt inspired by the work of Canova, especially his Damoxenes (Vatican Museum, Rome): it has the same pose and tense, muscular concentration.
On the other hand, the character's expressivity - the air of contained rage communicated by his attitude - was sometimes associated with Romantic sensibility.

The success of this work was also due to its subject. Spartacus was rarely represented in sculpture, and the statue was perceived as a symbol of opposition to the regime of Charles X, although this does not seem to have been the artist's original intention. Foyatier made the model at the Villa Medicis in Rome, where he was a guest from 1822 to 1825. He exhibited it at the 1827 Salon, and the marble used was commissioned by the royal administration. But by the time the sculpture was finished, the Trois Glorieuses (the July Revolution of 1830) had overthrown the regime of Charles X. Foyatier took this opportunity to make Spartacus a Republican icon, by dating the work 29 July 1830 (the last day of the Revolution). 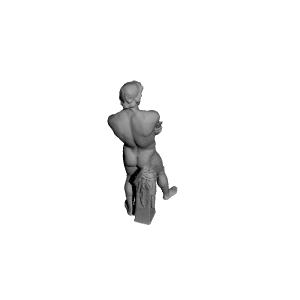 ×
5 collections where you can find Spartacus by Scan The World