3D
Scan The World
1,850 views 105 downloads
Community Prints Add your picture
Be the first to share a picture of this printed object
0 comments

A sphinx is a mythical creature with the head of a human and the body of a lion.

In Greek tradition, it has the head of a human, the haunches of a lion, and sometimes the wings of a bird. It is mythicised as treacherous and merciless. Those who cannot answer its riddle suffer a fate typical in such mythological stories, as they are killed and eaten by this ravenous monster. This deadly version of a sphinx appears in the myth and drama of Oedipus. Unlike the Greek sphinx, which was a woman, the Egyptian sphinx is typically shown as a man (an androsphinx). In addition, the Egyptian sphinx was viewed as benevolent, but having a ferocious strength similar to the malevolent Greek version and both were thought of as guardians often flanking the entrances to temples.

In European decorative art, the sphinx enjoyed a major revival during the Renaissance. Later, the sphinx image, something very similar to the original Ancient Egyptian concept, was exported into many other cultures, albeit often interpreted quite differently due to translations of descriptions of the originals and the evolution of the concept in relation to other cultural traditions.

Sphinxes are generally associated with architectural structures such as royal tombs or religious temples. The oldest known sphinx was found near Gobekli Tepe at another site, Nevali Çori, or possibly 120 miles to the east at Kortik Tepe, Turkey, and was dated to 9,500 BCE. 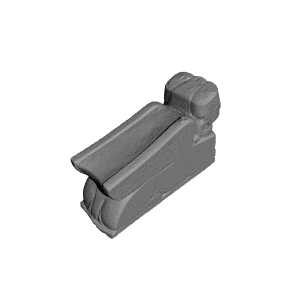 ×
0 collections where you can find Sphinx by Scan The World