There was a focus on the bodies of young girls also in classic salon sculpture. Verner Åkerman’s idealized and objectified figure poses with her eyes closed. According to the title, Spring Frost, she is supposed to symbolize the arrival of spring. She is depicted from the perspective of the heterosexual male gaze, as a symbol of female puberty, but in which the subject’s own desires are neither sought nor seen. 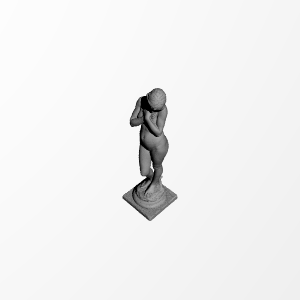 ×
19 collections where you can find Spring Frost by nationalmuseumswe
×
Masoud Bazzaz
@masoudbazzaz
1
Posted at: 28th January 2022

Thank you so much for the model. I had a lot of fun with that in 3dsmax for testing some materials and lighting setup to fulfill myself with those great forms.