In Genoa, the houses were often built in narrow, steep streets. This made the lintel the best place for any exterior decoration. It was often carved with images of St George and the Dragon or the Annunciation. These signalled the piety of the owner and sometimes included religious inscriptions.

This relief came from the doorway of a palazzo in Genoa. It is not clear to whom it belonged, as the coats of arms on the shields held by the soldiers on the right and left could be those of the di Negro or Novelli families. The theme of St George killing the dragon was popular for the highly decorated doorways favoured in Genoa.

Decorated door jambs and lintels were a common feature of Genoese architecture. As noted by R. Lightbown, their development was a result of the "…topography of the old city" in which tall houses were built on steep streets, thus leaving the doorway as the most visible area for display of wealth or family identification. (Lightbown, p.412).
Rectangular carved lintels surmounted the doorways of palazzi, and the lintels often contained a scene of St George killing the dragon. Often a square projection with the monogram of Christ would be found above such lintels.

The use of slate was typical in Genoa. It has high tensile strength and a high degree of water and fire resistance. These qualities, and its natural abundance in Liguria (the region of Genoa) made the city's preferred material for roof tiles, chimneys, doorways and floors. 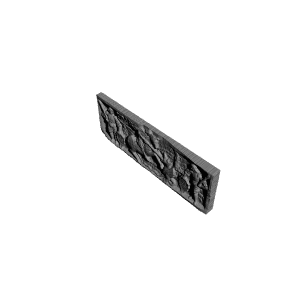