3D
Scan The World
2,417 views 109 downloads
Community Prints Add your picture
Be the first to share a picture of this printed object
0 comments

The British sculptor Arnold Machin created this sculpture of a nude, young representation of the biblical figure John the Baptist at prayer. The soft figure is juxtaposed against his strong gaze, a purposeful decision as Machin spent much of 1944 in prsion as a conscientious objector. "The themes of vulnerability and spiritual salvation may have had as much personal significance for him as they did for wider society engaged in a global war" (From the Tate Britain gallery label, September 2016).

Arnold Machin was born in Stoke-on-Trent in 1911 and died near Eccleshall in 1999. 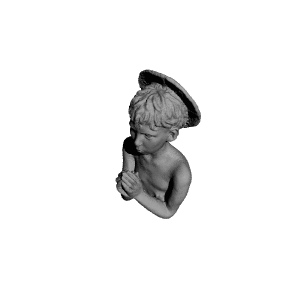