St John the Baptist was the first work by Rodin to enter an English public collection, and soon became the symbol of his dominant influence on sculpture at the beginning of the 20th century.

The second of Rodin's monumental bronze figures, it was deliberately made slightly over life-size to counter accusations that his first figure, The Age of Bronze, was a cast made directly from the model's body.

The form and modelling demonstrate Rodin's belief in the candid observation of uncontaminated natural man, a belief that derived from his study of the 18th-century philosopher Jean-Jacques Rousseau.

The work was also inspired by the unexpected appearance in Rodin's studio of an Italian peasant called Cesar Pignatelli. Rodin was taken by Pignatelli's wild, uncouth appearance and physical force , saying, 'I thought immediately of a St John the Baptist, that is to say a man of nature, a visionary, a believer, a precursor come to announce one greater than himself.' In fact, he is describing an outsider, someone with whom he and other avant-garde artists had a strong affinity. He used Pignatelli's wild air and wiry physique to convey John the Baptist's urgent effort to communicate, a struggle that makes powerful demands on his entire body as he strides forward.

Rodin exhibited the head alone as a bronzed plaster in the Paris Salon of 1879; the whole figure in plaster and carrying a cross in the left hand at the Salon of 1880; and the whole figure in bronze without the cross at the Salon the following year. The cross was removed to take away any narrative context for the figure, in much the same way that he had removed the staff from The Age of Bronze. This also allowed the torso of the figure to be viewed without interruption. 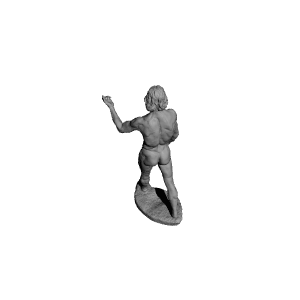