3D
360°
Featured Scan The World
2,398 views 164 downloads
Community Prints Add your picture
Be the first to share a picture of this printed object
0 comments

This St. Leonard was produced at the workshop of the most important ceramic sculptors in Renaissance Florence, the Della Robbia family. The elegant compostition of the figure, the modelling of the face, hands and garments, the qualities of the white and of the glaze, all indicate that the piece was produced during the period when Andrea Della Robbia was active there. Being destined for the Monastery of Santa Maria de Belém (Jerónimos), it arrived in Lisbon before 1514, forming part of a group of images commissioned in Florence, which included Our Lady of the Stars.

St. Leaonard was born in the fifth century, in Gaul. As his prayers had saved Queen Clotilde from birth during childbirth, King Clovis granted him land on which to found the monastery of the White Friars of Noblac (Limoges), giving him the right to exonerate condemned men and release those already in jail. For this reason, he is considered the patron saint of prisoners and the protector of women in childbirth. The white cloak, the book of monastic knowledge and the shackles of the prisoners that he holds in his hands evoke this story. 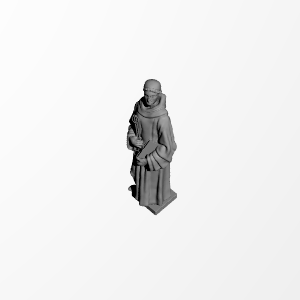 ×
0 collections where you can find St. Leonard by CEG