3D
Scan The World
2,496 views 118 downloads
2 collections
Community Prints Add your picture
Be the first to share a picture of this printed object
0 comments

The relief together with A.3-1990 comes from the Augustinian priory at Ivychurch, Wiltshire. Their exact use is unclear: Zarnecki has suggested that the works may have formed part of a screen or may have been placed on the piers of a cloister, while Williamson has proposed that they may have been used to adorn the façade of the Abbey. The reliefs were later inserted into the wall of Ivychurch House, the post-dissoloution succesor to the priory.

St Peter bears his attributes as a bishop: the pallium (worn around the neck) and a mitre. The pallium was bestowed by the pope. The crosier represented pastoral
responsibility. The keys signified that entrance to Heaven relied on obedience to the church. The figure probably came from a screen in the Augustinian priory at Ivychurch, Wiltshire.

Peter became leader of the twelve Apostles and was the closest to Christ. When paired with Saint Paul as this figure was at Ivychurch Priory, the two represent the pillars of the church. 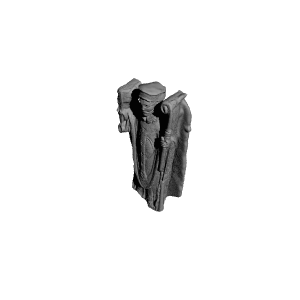