3D
Scan The World
3,203 views 255 downloads
1 collection
Community Prints Add your picture
Be the first to share a picture of this printed object
0 comments

Sculpted and signed by Linda Sober. She graduated from the Pallas Art School in 1938, worked as a freelance artist in Tartu until her flight from Estonia. Together with Amanda Jasmiin, Lydia Laas, Salme Riig and Leontine Lind-Karu, she belonged to the first generation of Estonian female sculptors to acquire their education at Pallas. Linda Sõber’s works were included in exhibitions even during her school years and caught the attention of a number of critics. In 1944, she escaped with her mother and young son to Germany, from where she moved in 1950 to San Remo, Italy, working as a freelance artist until her demise in 2004. Most of her sculptures from the period 1935–1944 are in the collections of the Art Museum of Estonia and the Tartu Art Museum. 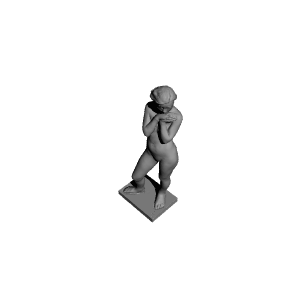