Statue from the Argive Heraion

3D
Scan The World
1,032 views 30 downloads
Community Prints Add your picture
Be the first to share a picture of this printed object
0 comments

Statue from the Argive Heraion

The sanctuary of Hera, which lies on a low hill between Argos and Mycenae, was a very old and highly important cult centre. The first temple of Hera was built in the 7th c. BC, probably to replace an earlier oecus or small temple.
The 7th-century temple was destroyed to the ground by fire caused by neglect on the part of the priestess Chryseis in 423 BC.
After the first temple was destroyed, a new Doric peripteral temple was built to the goddess by the architect Eupolemos of Argos about 420-410 BC, on a terrace lower than the old temple. The foundations of the 5th-century temple are still preserved, along with parts of the superstructure and of its lavish sculptural decoration. 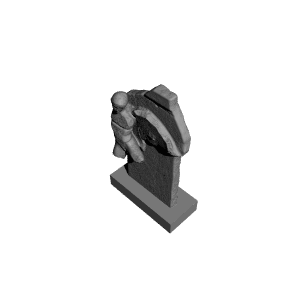