Statue of a Kouros

3D
Scan The World
1,430 views 54 downloads
Community Prints Add your picture
Be the first to share a picture of this printed object
0 comments

Statue of a Kouros

This statue of a kouros, realised in Naxian marble was found in Athens, near the Kerameikos. He originally would have stood atop a grave.

Keramikos (Greek: Κεραμεικός), also known by its Latinized form Ceramicus, is an area of Athens, Greece, located to the northwest of the Acropolis, which includes an extensive area both within and outside the ancient city walls, on both sides of the Dipylon (Δίπυλον) Gate and by the banks of the Eridanos River. It was the potters' quarter of the city, from which the English word "ceramic" is derived, and was also the site of an important cemetery and numerous funerary sculptures erected along the road out of the city towards Eleusis. 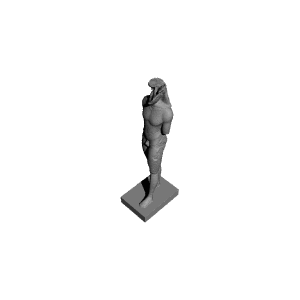