Statue of a woman, known as the "Lady of Auxerre"

3D
Scan The World
2,433 views 115 downloads
Community Prints Add your picture
Be the first to share a picture of this printed object
0 comments

Statue of a woman, known as the "Lady of Auxerre"

The Lady of Auxerre, masterpiece of the Daedalic style

The circumstances surrounding the discovery of this statuette, which was found in the storeroom of the Auxerre museum in 1907, remain unknown. However, it is the finest example of the Daedalic style, which marked the renewal of stone sculpting in the Greek world in the seventh century BC. The U-shaped face, the heavy, stepped hair, and the strict frontality are hallmarks of this style, which takes its name from Daedalus, who is said to have created the first statues in antiquity.

Since we know nothing about the context in which the statuette was discovered, it is difficult to identify the person depicted or to determine the meaning of the gesture of the right hand. Some think that this is the image of a goddess, considering the many terracotta figurines of Middle Eastern divinities (Astarte in particular) that highlight their sexual attributes. Others see this statue as a simple mortal, the servant of some fertility cult or perhaps the dedicator herself making a gesture of prayer.

The revival of stone sculpture in Crete in the Orientalizing period

This work is a testament to the intense artistic activity that took place in the eastern regions of the Mediterranean basin during the Orientalizing period. Techniques and decorative motifs originating in Egypt and the Near East were spread by Greek artisans who blended these models with their own traditions. The Auxerre statuette was created in Crete in the seventh century, around 640–620 BC. The work is assigned to Crete because of the type of limestone used as well as similarities of the young woman's costume, gesture, and face with works in bronze, limestone, and clay that have been discovered on the island. Comparison with funerary material excavated at Eleutherna, in northern Crete, suggests that the Lady of Auxerre was found in this necropolis in the late nineteenth century. 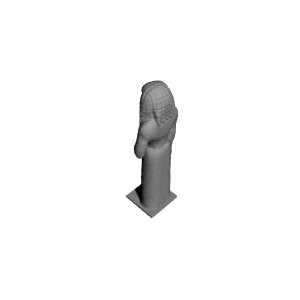 ×
0 collections where you can find Statue of a woman, known as the "Lady of Auxerre" by Scan The World