Statue of Apollo, The Omphalos Apollo

3D
Scan The World
3,916 views 190 downloads
3 collections
Community Prints Add your picture
Be the first to share a picture of this printed object
0 comments

Statue of Apollo, The Omphalos Apollo

This statue of Apollo, carved from Pentelic marble, was found in Athens at the Theatre of Dionysus.

Known as the "Omphalos Apollo", this sculpture was named after a base in the shame of the omphalos, with which it was originally associated.

It is a work of the 2nd century AD, copying the bronze original (now lost) sculptured in 460-450 BC by a competent sculptor of the Severe Style, possibly Kalamis.

Over twenty versions and copies of this sculpture type are known to exist.

According to mythology, the omphalos was a net-covered rock used to mark the centre of the world. One of the stones was kept at Delphi and it is that stone that has supposedly been preserved with this replica.

The weight of the piece rests upon the right leg. The left is slightly withdrawn and held away from the body. The slight outward projection of the right hip is balanced by the outward movement of the arms.

The figure's head is tilted to the right, displaying the god's long, oval-shaped face. The god's large, deeply set eyes and soft, full lips dominate his face. His head is crowned by a mass of hair arranged in thin, orderly locks that fall onto his forehead. A thin double-brain of hair runs around his head.

The figure's hair and other aesthetic features are typical of the Severe style popular during the fifth century BC. 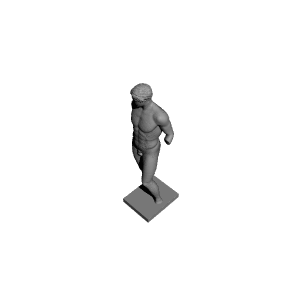 ×
3 collections where you can find Statue of Apollo, The Omphalos Apollo by Scan The World