3D
Scan The World
3,022 views 168 downloads
Community Prints Add your picture
Be the first to share a picture of this printed object
0 comments

This statue portrays Aphrodite bathing a pose that reveals her secret beauty, more human than divine. It is a Roman copy of the Crouching Aphrodite made by the Bithynian sculptor Doidalsas. here the pose of the goddess appears rather stiff compared to the original bronze of the 3rd century BC. The goddess' right knee should have been lowered so that it just touches the base, as in an Aphrodite in the Vatican Museum Collection, the sculpture most similar to this one. The base on which the figure was sitting was probably in the form of a hydria, the water container used by the goddess in her ritual bath. First owned by the Jandolo family, this Aphrodite was a later illegally exported and added to a prvate collection in Monaco. It was reclaimed and brought back to Italy in 1964, then put on display in the National Roman Museum. The sculpture dates to the first half of the 2nd century AD. 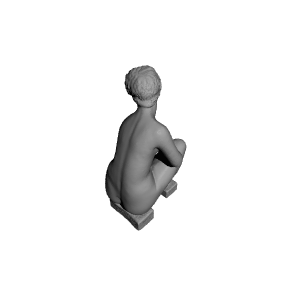