Statue of Gudea: King of Lagash

3D
Scan The World
4,411 views 142 downloads
Community Prints Add your picture
Be the first to share a picture of this printed object
0 comments

Statue of Gudea: King of Lagash

Approximately twenty-seven statues of Gudea, a ruler (ensi) of the state of Lagash have been found in southern Mesopotamia. Gudea ruled between ca. 2144 - 2124 BC and the statues demonstrate a very sophisticated level of craftsmanship for the time.

The statues were to represent the ruler in temples, to offer a constant prayer in his stead; offerings were made to these. Most of the statues bear an inscribed dedication explaining to which god it was dedicated. Gudea is either sitting or standing; in one case (N), he holds a water-jug au vase jaillissant. He normally wears a close fitting kaunakes, maybe made of sheep-skin, and a long tasseled dress. Only in one example (M, Soclet-statue) he wears a different dress, reminiscent of the Akkadian royal costume (torso of Manishtushu). On the lap of one of them (statue B) is the plan of his palace, with the scale of measurement attached. Statue F is similar to statue B; both are missing their heads, and have on their lap a board with a measuring scale and a stylus, only statue F doesn't have a ground plan.

It seems that the early statues are small and made of more local stones (limestone, steatite and alabaster); later, when wide-ranging trade-connections had been established, the more costly exotic diorite was used. Diorite had already been used by old Sumerian rulers (Statue of Entemena). According to the inscriptions, the diorite came from Magan. The remnants of a very large diorite statue in the British Museum may be a representation of Gudea, but this cannot be determined with certainty. What remains of the statue is 1.5m high (and weighs over 1250 kg), meaning that if it was fully reconstructed the statue would be well over 3 metres high and the largest yet discovered sculpture of the ruler.

The dedication of the diorite statues normally tell how ensi Gudea had diorite brought from the mountains of Magan, formed it as a statue of himself, called by name to honour god/goddess (x) and had the statue brought into the temple of (y). Most of the big (almost lifesize, D is even bigger than life) statues are dedicated to the top gods of Lagash: Ningirsu, his wife Ba'u, the goddesses Gatumdu and Inanna and Ninhursanga as the "Mother of the gods". Q is dedicated to Ningiszida, Gudea's personal protective deity more properly connected to Fara and Abu Salabikh, the smaller M, N and O to his "wife" Gestinanna. The connection between Ningiszida and Gestinanna was probably invented by Gudea in order to effect a closer connection to Lagash. 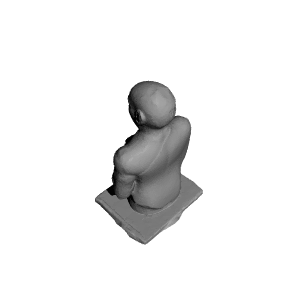 ×
0 collections where you can find Statue of Gudea: King of Lagash by 3DLirious