This is a 3D model of a bronze cast of Frederic Auguste Bartholdi's maquette for the Statue of Liberty.

After the Statue of Liberty was finished, Bartholdi would occasionally commission the French foundry Thiebaut Freres to create a bronze cast from his original maquette. The bronzes that were cast were usually gifts for friends. They are now highly sought after by collectors. The museum inside Fort Wood under the Statue of Liberty has a modern bronze copy of one of these wonderful sculptures.

I was lucky enough to have access to one of these bronze sculptures and I photographed it extensively. I'm pleased with the resulting model since the sculpture was made of bronze, had a dark and shiny surface. A beautiful thing to look at, but harsh to photograph and model from.

I tried to match the size of the original so I scaled this 3D model to roughly one meter.

If you look carefully, you'll notice that one of the rays on the left side of the crown is slightly bent back, probably from a slight mishap. I chose to leave that feature alone as I didn't want to muddle with the model too much. 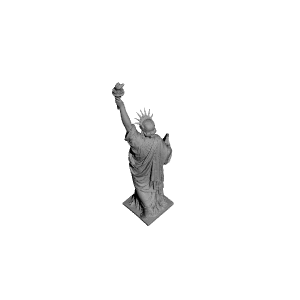 ×
25 collections where you can find Statue of Liberty maquette by jerry7171
×
Chris Setley
@setleyc
1
Printed on: Ultimaker 2
Material: PLA
Posted at: 26th September 2016

I decided to print this at 1000mm in height. Once I upsized the model, I cut it apart into smaller blocks to fit inside my printer, a Creality Ender-2. After all the blocks were finished, I glued them together, filled in the gaps and painted the print several times to smooth out the print lines. My final choice of color was terra-cotta. I painted the flame gold. I chose to make the rays of the diadem out of pieces of plastic trimmed from an old hotel key card that were painted gold. Now it stands in my living room. Nothing classes up a room like a Statue of Liberty. :-)

I moved the same model outside recently in honor of Memorial Day. A few of the rays got lost. Next time I'll use epoxy instead of superglue. I printed this on a Creality Ender-2.