Statue of Osorkon 1st at The Louvre, Paris

3D
Scan The World
3,052 views 242 downloads
Community Prints Add your picture
Be the first to share a picture of this printed object
0 comments

Statue of Osorkon 1st at The Louvre, Paris

The son of Shoshenq I and his chief consort, Karomat A, Osorkon I was the second king of Egypt's 22nd Dynasty and ruled around 922 BC – 887 BC. He succeeded his father Shoshenq I who probably died within a year of his successful 923 BC campaign against the kingdoms of Israel and Judah. Osorkon I's reign is known for many temple building projects and was a long and prosperous period of Egypt's History. His highest known date is a "Year 33 Second Heb Sed" inscription found on the bandage of Nakhtefmut's Mummy which held a bracellet inscribed with Osorkon I's praenomen: Sekhemkheperre. This date can only belong to Osorkon I since no other early Dynasty 22 king ruled for close to 30 years until the time of Osorkon II. Other mummy linens which belong to his reign include three separate bandages dating to his Regnal Years 11, 12, and 23 on the mummy of Khonsmaakheru in Berlin. The bandages are anonymously dated but definitely belong to his reign because Khonsmaakheru wore leather bands that contained a menat-tabnaming Osorkon I. Secondly, no other king who ruled around Osorkon I's reign had a 23rd Regnal Year including Shoshenq I who died just before the beginning of his Year 22.

While Manetho gives Osorkon I a reign of 15 Years in his Ægyptiaca, this is most likely an error for 35 Years based on the evidence of the second Heb Sed bandage, as Kenneth Kitchennotes. Osorkon I's throne name--Sekhemkheperre--means "Powerful are the Manifestations of Re." 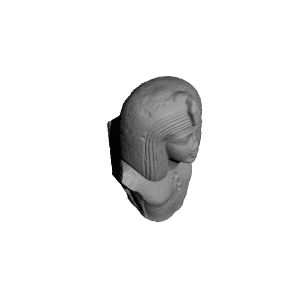 ×
0 collections where you can find Statue of Osorkon 1st at The Louvre, Paris by Scan The World