Statue of the dying Gaul

3D
Scan The World
2,666 views 139 downloads
1 collection
Community Prints Add your picture
Be the first to share a picture of this printed object
0 comments

Statue of the dying Gaul

This high relief portrays a warrior fallen in battle lying on an irregular oval base. The eastern style of the clothes, light trousers and a Phrygian cap, mark him out as a likely Gaul.

It is originally part of a group of four statues (statue of the dying Gaul, statue of dead Giant, statue of dying Persian, statue of fallen Amazon). They were placed in the Baths of Agrippa in Rome in order to celebrate the victories that Agrippa had gained over the Galatians in 37 BC. The statues, discovered in 1514, belonged to the Medici Orsini family and to Margaret of Austria; then they were acquired by the Farnese family.
The basic theme regards four battles, two mythical ones (Gigantomachy and Amazonomachy) and two historical ones (the battle of Marathon between the Persians and the Athenians and the battle between the Attalids and the Galatians). 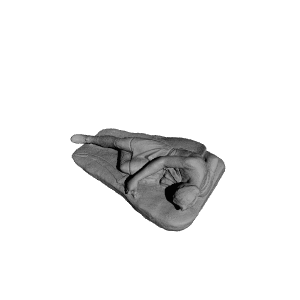