3D
Scan The World
1,626 views 59 downloads
3 collections
Community Prints Add your picture
Be the first to share a picture of this printed object
0 comments

This second century statue of the personification of the Iliad was probably from the Library of Pantainos. It is displayed at the Stoa of Attalos in Athens, Greece. The Stoa of Attalos is a 1950s recreation of a long pavilion that was originally built around 150 BC. It was part of the Ancient Agora (market). It now houses the Museum of the Ancient Agora, which includes clay, bronze and glass objects, sculptures, coins and inscriptions from the 7th to the 5th century BC, as well as pottery of the Byzantine periode and the Turkish conquest. 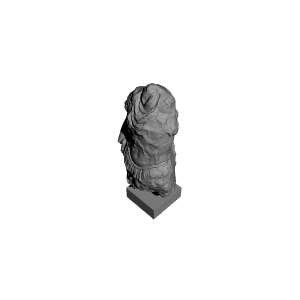