The graves of the kings of Dynasty 1 and 2 were significantly larger and more elaborate than their late Predynastic predecessors. Their monumental tombs were marked in a new way: with stelae, stone pillars bearing the royal name inside a rectangular form. The lower half of the stela was modeled after the niched facade of palace architecture, white hieroglyphs spelled out the king's name in the space above - here, a sun (re) above a basket (neb). At the top, horus, king of the gods in his guise of a falcon, proclaims the named individual the ruler of Egypt. It is possible that Raneb, which traditionally has been translated as "Re is my lord", actually reads Nebra, or "Lord of the sun." The use of the formal name Re is unknown before Dynasty 4, so here, the word re would refer simply to the sun. Nebra, the second king of Dynasty 2, is poorly represented in art and, apart from this stela, is known only from a few inscribed jars. 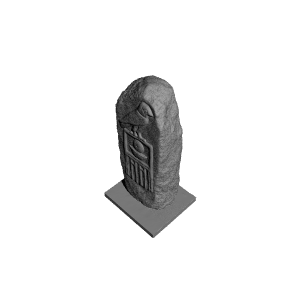 ×
2 collections where you can find Stela of Nebra by Scan The World
×
John Riley
@zrileys
0
Printed on: Makerbot Replicator Z18
Material: PLA
Posted at: 28th June 2022