In the franchise's chronology, he was originally created by Dr. Jumba Jookiba to cause chaos across the galaxy. Stitch is marked by his mischievous behavior, which endeared him to Lilo, who adopted him as her "dog". Through Lilo's beliefs in the Hawaiian concept of ʻohana, meaning family, Stitch developed from an uncaring, destructive creature to a loving, more self-conscious being who enjoys the company of his adoptive family on Earth. He became a firm believer of the ʻohana concept, and with the help of Lilo applied it to reform Jumba's 625 prior experiments, nearly all of whom Stitch treats as his "cousins". 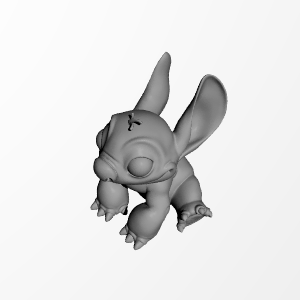 ×
79 collections where you can find Stitch Disney- easy print by SzonyiBalazs
×
May Shue
@illiane
2
Printed on: Monoprice
Material: PLA
Posted at: 11th September 2020