3D
Scan The World
2,227 views 115 downloads
Community Prints Add your picture
Be the first to share a picture of this printed object
0 comments

Masks were sculpted in stone that was carefully selected for its visual qualities and symbolic value. Their planar geometry reflects the principles expressed in the public architecture of Teotihuacan. Masksrange in size from portable objects to massive examples and the eyes and mouths weer once inlaid with marine shell, turquoise and polished iron pyrites. They were not intended to be worn, but were most likely mounted on a wooden armature and dressed in elaborate costumes to embody deified ancestors and gods. Many have been found in the temples and administrative buildings adjoining the central avenue of the city, the Street of the Dead. Some masks inherit elements from earlier traditions.

The Valley of Mecixco lies in a great mountain basin at an altitude of 2,000 metres. Here, Highland Formative communities settled in permanent lakeshore villages, adopted agriculture and traded obsidian with neighbouring regions.

Towards the end of the first millennium BC the metropolis of Teotihuacan grew to dominate the political, economic and religious life of the central highlands of Mexico. By AD 600, with over 100,000 inhabitants, it was the largest urban centre in the Americas and the sixth most populous city in the world at that time. An impressive three-mile-long ritual avenue crossed the city from north to south flanked by plazas, palace compounds and apartment complexes, all overshadowed by the imposing bulk of the Pyramid of the Sun. Residential quarters housed enclaves of foreign merchants and artisans from Veracruz and the Oaxaca Valley. In return, Teotihuacan sent its own trading and religious emissaries to far-flung sites such as Matacapan on the Gulf Coast and Kaminaljuyu and Tikal in Maya territory. 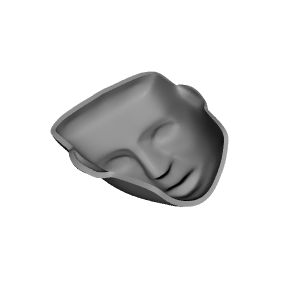 ×
0 collections where you can find Stone mask at The British Museum, London by Scan The World