This sculpture depicts a woman holding what appears to be the crops from the summer. This piece is by Pierre Le Gros, a French sculptor, active almost exclusively in Baroque Rome. Nowadays, his name is commonly written Legros, while he himself always signed as Le Gros; he is frequently referred to either as 'the Younger' or 'Pierre II' to distinguish him from his father, Pierre Le Gros the Elder, who was also a sculptor. The "ardent drama" of his work and its Italian location make him more an Italian, than a French, sculptor. Despite being virtually unknown to the general public today, he was the pre-eminent sculptor in Rome for nearly two decades, until he was finally superseded at the end of his life by the more classicizing Camillo Rusconi. 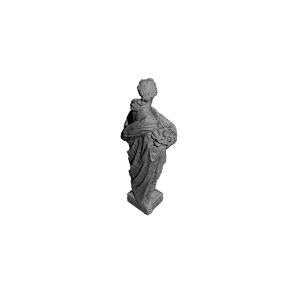 ×
0 collections where you can find Summer at the Louvre, Paris, France by Scan The World
×
Andrew Wu
@andrewwu
0
Printed on: Other
Material: PLA
Posted at: 16th September 2021