Ten examples illustrating Psalm 150 and young singers of the Cantoria

3D
Scan The World
1,230 views 61 downloads
1 collection
Community Prints Add your picture
Be the first to share a picture of this printed object
0 comments

Ten examples illustrating Psalm 150 and young singers of the Cantoria

In the first quarter of the fifteenth century, the Operai del Duomo of Florence initiated a program to decorate the inside of the Duomo and the two sacristy doors. The plan to provide decoration for the Duomo's organ (perghamo degli orghani) was first conceived in 1430, when the commission for the work was given to Luca della Robbia. At the time, Donatello was still in Rome. He returned in 1433 and was given the commission of a second "perghamo" with the stipulation that the cost of his work was not to exceed that of della Robbia's.

For that reason, the two works ended up being almost exactly the same size and looking very much the same. Both men decorated the surface of their respective galleries with putti (nude, chubby, dancing children); however, their styles were markedly differently. Where della Robbia concentrated on bringing out the realness of the children, Donatello drew inspiration from antiquity and classic styles. Donatello's children are all winged and wear simple shift garments. 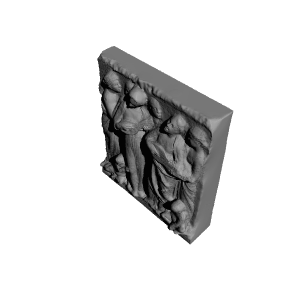