Terracotta Figure of a Woman with Long Hair at The British Museum, London

3D
Scan The World
3,220 views 64 downloads
Community Prints Add your picture
Be the first to share a picture of this printed object
0 comments

Terracotta Figure of a Woman with Long Hair at The British Museum, London

From Yotkan, capital of the kingdom of Khotan, modern Xinjiang province of the 2nd-3rd century AD. The oasis statue of Khotan with its capital at Yotkan, south of the Taklamakan desert, was a prosperous and powerful kingdom. Excavations have yielded many terracotta figures and ceramics of a Hellenistic style adopted from Iran. There are virtually no similarities with artefacts from Central China.

The 2nd century is the period from 101 to 200 in accordance with the Julian calendar in the Common Era. It is considered part of the Classical era, epoch, or historical period. Early in the century, the Roman Empire attained its greatest expansion under the emperor Trajan, but after his death became primarily defensive for the rest of its history. Much prosperity took place throughout the empire at this time, ruled as it were by the Five Good Emperors, a succession of just and able rulers. This period also saw the removal of the Jews from Jerusalem during the reign of Hadrian after Bar Kokhba's revolt. The last quarter of the century saw the end of the period of peace and prosperity known as the Pax Romana at the death of the emperor Marcus Aurelius, last of the "Five Good Emperors", and the accession of his ineffective and deranged son Commodus. Although the Han Dynasty of China was firmly cemented into power and extended its imperial influence into Central Asia during the first half of the century, by the second half there was widespread corruption and open rebellion. This set in motion its ultimate decline, until it was overthrown in 220.The 3rd century was the period from 201 to 300 A.D. In this century, the Roman Empire saw a crisis, marking the beginning of Late Antiquity. In Persia, the Parthian Empire was succeeded by the Sassanid Empire. In India, the Kushan Empire was replaced by the Gupta Empire. China was in the Three Kingdoms period. The Xiongnu formed the Tiefu state under Liu Qubei. Korea was ruled by the Three Kingdoms of Korea. Japanentered the Kofun period.

In Pre-Columbian America, the Adena culture of the Ohio River valley declined in favor of the Hopewell culture. The Maya civilization entered its Classic Era.After the death of Commodus in the previous century the Roman Empire was plunged into a civil war. When the dust settled, Septimius Severus emerged as emperor, establishing the Severan dynasty. Unlike previous emperors, he openly used the army to back his authority, and paid them well to do so. The regime he created is known as the Military Monarchy as a result. The system fell apart in the 230s, giving way to a fifty-year period known as the Military Anarchy or the Crisis of the Third Century, where no fewer than twenty emperors held the reins of power, most for only a few months. The majority of these men were assassinated, or killed in battle, and the empire almost collapsed under the weight of the political upheaval, as well as the growing Persian threat in the east. Under its new Sassanid rulers, Persia had grown into a rival superpower, and the Romans would have to make drastic reforms in order to better prepare their state for a confrontation. These reforms were finally realized late in the century under the reign of Diocletian, one of them being to divide the empire into an eastern and western half, and have a separate ruler for each.

Easy print with one support. 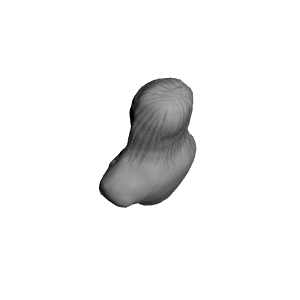 ×
0 collections where you can find Terracotta Figure of a Woman with Long Hair at The British Museum, London by Scan The World