Thalia, Muse of Comedy at The British Museum, London

3D
Scan The World
2,591 views 166 downloads
Community Prints Add your picture
Be the first to share a picture of this printed object
0 comments

Thalia, Muse of Comedy at The British Museum, London

In ancient mythology, Thalia was one of the nine Muses. The Muses were female companions of the god Apollo and devoted to the arts and sciences. Although Thalia was associated with comedy, Roman poets describe her as graceful and tender.

The skilfully carved marble statue beautifully captures her spirit. The ivy wreath and shepherd's crook symbolise Thalia's connection with the countryside, from which comic performances originated. Her heavy mantle has slipped from her shoulders, revealing a thinner under-garment that accentuates her alluring female body.

The statue was discovered in 1776 by the British painter and excavator Gavin Hamilton. It came to light with a number of other sculptures in an ancient bath building of Rome's port city, Ostia. In line with practices at the time, the statue was expertly restored and then acquired by the leading British collector, Charles Townley, for his house museum in London.

Lots of support for arm. 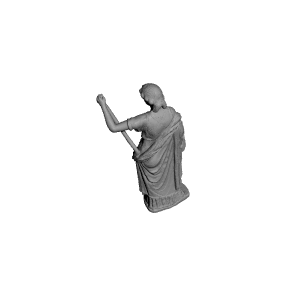 ×
0 collections where you can find Thalia, Muse of Comedy at The British Museum, London by Scan The World