The Angel Gabriel From The Annunciation

3D
Scan The World
5,857 views 575 downloads
3 collections
Community Prints Add your picture
Be the first to share a picture of this printed object
0 comments

The Angel Gabriel From The Annunciation

This angel would have formed part of an Annunciation scene (the figure of the Virgin is now lost). The right hand raised in a gesture of speech and the forefinger pointing upwards suggest a reference to God the Father, or the presence of the Holy Spirit. The angel probably once held a scroll in his left hand, which would have been painted with a text.

Stylistically this sculpture looks back to an earlier tradition of sweetly smiling figures, which developed in the 13th century and influenced by sculptures at Reims Cathedral. The unusual iconography with the angel approaching from the right is found in illuminated manuscripts dating from after 1415. The style of the carving and iconographical evidence illustrated by painted Annunciations suggests a date between 1415 and 1450. 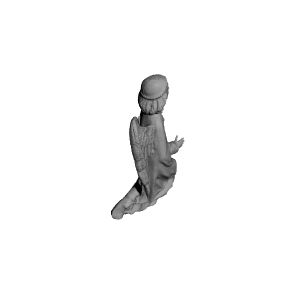