3D
Scan The World
1,941 views 71 downloads
Community Prints Add your picture
Be the first to share a picture of this printed object
0 comments

The sanctuary of Hera, which lies on a low hill between Argos and Mycenae, was a very old and highly important cult centre. The first temple of Hera was built in the 7th c. BC, probably to replace an earlier oecus or small temple, as is shown by a clay model dating from the early 7th c. BC found during the excavation of the sanctuary (Collection of Vases, Room 52, inv. no. 15471). The 7th-century temple was destroyed, a new Doric peripteral temple was built to the goddess by the architect Eupolemos of Argos about 420-410 BC, on a terrace lower than the old temple. The foundations of the 5th-century temple are still preserved, along with parts of the superstructure and of its lavish sculptural decoration. The birth of Zeus was depicted on the pediment of the east side of the temple, while Gigantomachy was represented on the metopes of this same side. The west side of the temple was dominated by depictions of themes drawn from the Trojan War cycle. The west pediment had a representation of the Sack of Troy; to it belongs the Palladion clutched in her arms by the suppliant Cassandra, daughter of Priam, the king of Troy (inv. no. 3869). The metopes of this side depict the Trojan Amazonomach (inv. nos. 1572-1574, 3500, 4070). Several pieces of the sima are preserved from the superstructure of the temple (inv. nos. 1579-1583, 3973-3975, 3979A and 4400-4404): water-spouts in the form of lion's heads, relief palmettes, tendrils and cuckoos, the bird sacred to the goddess. The colossal gold and ivory cult statue of Hera that will have stood inside the temple was the work of the Argive sculptor Polykleitos. Its form is known from depictions on coins of Argos issued in the 2nd c. ADand from the description by the travel-writer Pausanias. 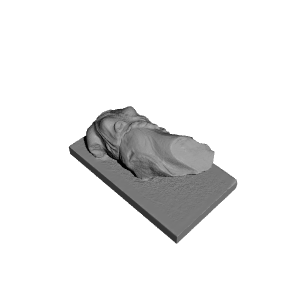