Created in the beginning of the Classical Period of Greek sculpture (ca. 480–300 BCE), this elegant and balanced figure is the embodiment of beauty, control, and strength.

Thought to represent the mightiest of the Olympian gods, Zeus (or less likely Poseidon), this monumental bronze sculpture was found in two pieces at the bottom of the sea off the Cape of Artemision in the 1920s. Zeus is shown in full heroic nudity with his left arm and foot thrust dynamically forward in the direction of his foes, while his right leg and arm are raised and slightly bent, implying movement. Zeus is the militant protector ready for action and would have originally been holding a thunderbolt (or trident, in the case of Poseidon).

Meant to be seen from one ideal vantage point—standing facing the vast and muscular torso—this three-dimensional figure demonstrates complete mastery of anatomy. From the intense expression on his face, the bulging veins of his feet, and the variegated transitions between muscles, Zeus appears to be rendered from a human model. However, on closer examination, it is clear that aspects have been simplified and proportions expanded to give the figure the exemplary body worthy of his divine status. The sculpture, which presents its subject as superhuman rather than suprahuman, is in keeping with the Greek conception of gods as immortal and immensely powerful, yet subject to the personality flaws and unpredictable emotions of mortal beings.

The Greek word for image, agalma, means “delight,” and a sculpture like this would have been created for the delight of not only Greek citizens, but also the gods. This statue was probably created as a votive for a temple dedicated to Zeus. In presenting such works as offerings, the Greeks attempted to appease their gods, earning divine assistance or favor in return. 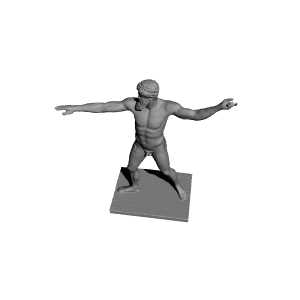 ×
11 collections where you can find The Artemision Bronze at The National Archaeological Museum in Athens, Greece by Scan The World
×
Juan Bosch
@optika
1
Printed on: Creality Ender 3 Pro
Material: PLA
Posted at: 23rd July 2020