The Birth of the Pegasus

3D
Scan The World
3,360 views 151 downloads
2 collections
Community Prints Add your picture
Be the first to share a picture of this printed object
0 comments

The Birth of the Pegasus

There are several versions of the birth of the winged stallion and his brother Chrysaor in the far distant place at the edge of Earth, Hesiod's "springs of Oceanus, which encircles the inhabited earth, where Perseus found Medusa:

One is that they sprang from the blood issuing from Medusa's neck as Perseus was beheading her, similar to the manner in which Athena was born from the head of Zeus. In another version, when Perseus beheaded Medusa, they were born of the Earth, fed by the Gorgon's blood. A variation of this story holds that they were formed from the mingling of Medusa's blood, pain and sea foam, implying that Poseidon had involvement in their making. The last version bears resemblance to Hesiod's account of the birth of Aphrodite from the foam created when Uranus's severed genitals were cast into the sea by Cronus.

Alexander Bourganov (Born 1935) is a Russian sculptor, a National Artist of Russia, and a member of the Russian Academy of Fine Arts. His recent works include a monument to Alexander Pushkin located at George Washington University in Washington DC (2000); a statue of John Quincy Adams, the first U.S. Ambassador to Russia and later President of the United States, located in front of the U.S. Embassy in Moscow (2008); and a statue of poet Walt Whitman located on the campus of Moscow State University (2009). In 2001 his studio in Moscow was given the status of a State Museum, known as Bourganov's House. His other works around Moscow include a series of fountains and statues on Ukrainsky Boulvar, near the Hotel Ukraine.

Bourganov was born in Baku, Azerbaijan and was graduated from Moscow State Artistic and Industrial College (now Stroganov University). He received a PhD. in art history.

In March 2014 he signed a letter in support of the position of the President of Russia Vladimir Putin on Russia's military intervention in Ukraine.

Print standing up with supports and brim; 0.15mm layer height or better. 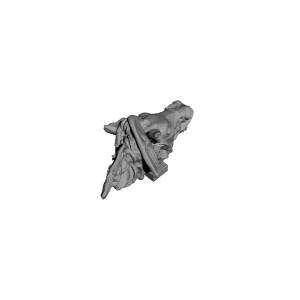