3D
Scan The World
2,569 views 106 downloads
Community Prints Add your picture
Be the first to share a picture of this printed object
0 comments

"Niepokorny" ("Defiant") is the title of the exhibition dedicated to the eminent Polish sculptor Xawery Dunikowski, showcasing his most notable and famous works against the backdrop of the narrative of major creative stages in the artist's life. The exhibition celebrates 30 years of activity on the part of the Centre of Polish Sculpture in Orońsko

Without a word of encouragement, nor a single applause and hunted by stupidly hostile glances given from the crowd, Dunikowski, with genuinely contempt praise and reprimand lurking over him, swims against and fights the current, making his own true art in spite of the feelings and attitudes of the social environment surrounding him.

Dunikowski was certainly a rebellious and defiant artist. In every stage of his extensive creative life, he surprised and shocked the audience. He was mentally and psychologically by far ahead of the era in which he worked. His works were known as 'Plaster Monsters' while the creator himself was separated from the common worship and faith pursued by fellow Poles. During the period of Young Poland, he demonstrated a lot of symbolic sculptural groups, such as "Tchnienie" / "A Breath of Air", "Jarzmo" / "Yoke", "Macierzyństwo" / "Motherhood" and "Fatum" / "Fate" - which were all regarded upon as "twisted and bizarre" epithets. 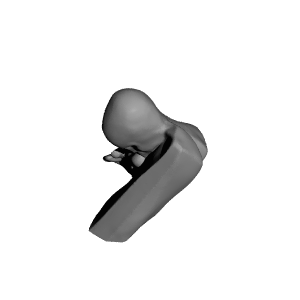