The Burghers of Calais in Calais, France

The Burghers of Calais in Calais, France

In 1347, after a year-long siege, six citizens of Calais agreed to sacrifice their lives and hand over the keys of their city to its conqueror, King Edward III of England. The story was related in Jean Froissart’s Chronicles (1370-1400).

In September 1884, the Mayor of Calais,Omer Dewavrin, suggested erecting a monument as a tribute to the heroism of Eustache de Saint Pierre and his companions, with the aid of a national appeal fund.Alphonse Prosper Isaac, a Calais-born painter who had settled in Paris, was asked to advise the monument committee on the sculptor to be chosen. He put forward Rodin’s name. As soon as he started reading Froissart’s account of the historic episode, Rodin began working on the project, even before the commission was confirmed. He decided not represent just one burgher of Calais but all six in a “slow procession towards death”: Eustache de Saint Pierre, Jean d’Aire, Pierre and Jacques de Wissant,Andrieu d’Andres and Jean de Fiennes.

The notion of collective sacrifice was emphasized even in the first maquette.The six figures, not yet individualized, were presented on the same plane, one next to the other, with no visible order of importance and all clad in the loose garments of men about to be executed. They were placed on a very high rectangular base, adorned with bas-reliefs, which formed a triumphal pedestal. This first maquette was greeted enthusiastically by the committee. Rodin was officially awarded the commission for the monument and the price was set at 15,000 francs.

He then pursued his investigations into the identity of each figure and made them express the different feelings experienced by men on the verge of death: despair, resignation, courage, impassiveness or uncertainty.He modelled them directly in their actual size, first unclothed, then clothed in the type of tunics worn by the condemned men. He arranged real shirts dipped in plaster on the nude studies, so that the bodily build could be seen under the garments.

In tandem with his figures, he worked on the heads and hands separately. These became sculptures in their own right. The monument was completed in 1889, the year in which it was first presented at the Monet- Rodin exhibition in the Galerie Georges Petit, Paris. 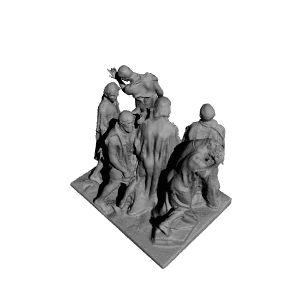 ×
9 collections where you can find The Burghers of Calais in Calais, France by Scan The World
×
Scott Correia
@Joe_Snuffy
1
Posted at: 27th November 2022