The Campbell Sisters at The Scottish National Gallery, Scotland

3D
Scan The World
3,073 views 192 downloads
Community Prints Add your picture
Be the first to share a picture of this printed object
0 comments

The Campbell Sisters at The Scottish National Gallery, Scotland

This group shows Emma and Julia, the two youngest daughters of Lady Charlotte Campbell, sister of the Duke of Argyll, and her first husband Colonel John Campbell of Shawfield. Bartolini described the girls as ‘dancing a waltz’, an action skilfully conveyed by their graceful, tip-toe poses and gently wafting draperies. Commissioned by their elder brother, the finished marble was shipped from Livorno to Edinburgh, and was installed in the dining room at Inveraray Castle, the seat of the Dukes of Argyll. The base is inscribed with a dedication to the English sculptor John Flaxman, whose engravings of Homeric subjects Bartolini greatly admired. This is the most important piece of Italian sculpture carved for a Scottish patron in the nineteenth century.

After a colourful early career which took him to Paris as a drummer in Napoleon’s army, Bartolini settled in Florence in 1815. Bartolini was the leading Italian sculptor after the death of Canova in 1822, his position eclipsed only by that of the Dane Bertel Thorvaldsen in Rome, who died in 1838. Bartolini is best known for his lively portrait busts, and was much patronised by visiting tourists, who were pleasantly surprised by the relatively modest prices he charged. The contents of Bartolini’s studio (gipsoteca), including the full scale model for ‘The Campbell Sisters’ group (NG 2876), belong to the Galleria dell’ Accademia in Florence. 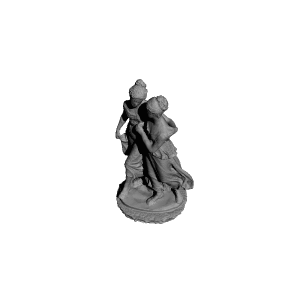 ×
0 collections where you can find The Campbell Sisters at The Scottish National Gallery, Scotland by Scan The World