3D
Scan The World
1,450 views 45 downloads
1 collection
Community Prints Add your picture
Be the first to share a picture of this printed object
0 comments

This low relief sculpture was found in the Guatemalan department of Suchitepequez.
It is a piece of clear Olmec influence, from the Preclassic Period, in which two personages can be observed.

The first, in the centre, is shown with his legs bent back in an arched position,
what can be observed are the soles of his feet next to his headdress. The second figure is seen with his torso circling the perimeter of the stone. The figures form two interlocking circles, which could possibly represent two contortionists, although up to now no other Olmec sculpture to depict such a theme is known. 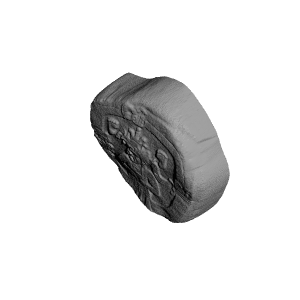