3D
Scan The World
3,577 views 91 downloads
2 collections
Community Prints Add your picture
Be the first to share a picture of this printed object
0 comments

The ancient Egyptians believed this mummy was incarnation of the crocodile god Sobek. Nearly 4 metres long, it is coated with resin and has over 25 mummified crocodile hatchlings attached to its back. This display uses state-of-the-art CT scans to reveal this creature’s hidden secrets. Other objects show how Sobek was represented both as a crocodile and as a man with a crocodile’s head.

Animal mummies provide a unique insight into the religious beliefs of ancient Egyptians – the animals could be beloved pets, votive offerings for the gods, or manifestations of the gods themselves. Crocodiles were creatures of both reverence and terror – their connections to the Nile meant they were associated with fertility, but their reputation as a dangerous predator meant they were also feared as killers.

This mummy was found at Kom Ombo, a temple and cemetery site about 50km north of Aswan in Egypt, and it dates to between 650 and 550 BC. Over 300 mummified crocodiles have been found at Kom Ombo. The temple there was dedicated to both the falcon god Horus and Sobek, who personified the strength, power and potency of the pharaoh.

CT scanning at the Royal Veterinary College has revealed that some of the internal organs were removed and replaced with linen packing during mummification. Several fragments of cattle bones, as well as rocks, were also present, likely the remainder of the crocodile’s last meal.

During its life, this crocodile would have been kept in captivity in a temple beside the river at Kom Ombo, 50 kilometres north of Aswan, in Upper Egypt. This was one place where Sobek, the crocodile god, was worshipped and there may have been a temple here as early as 1985-1975 BC.

In his temple, known as the 'House of Sobek', this crocodile would have been revered as a manifestation of the god. As a crocodile god, Sobek possessed many of the qualities and demeanour of the living reptile. He was feared for his voracious appetite, but also venerated for his fertility and association with the annual Nile floor. Kom Ombo was one of the first places where, each year, the ancient Egyptians monitored the rising waters of the Nile, as the river's level indicated whether or not the crops would be plentiful. Over 300 crocodile mummies were recovered from the site and it is thought crocodiles were bred in a pool west of the temple. 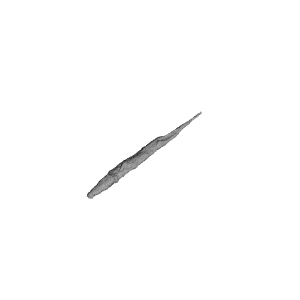 ×
2 collections where you can find The Crocodile God, Sobek by Scan The World