3D
Scan The World
2,977 views 230 downloads
2 collections
Community Prints Add your picture
Be the first to share a picture of this printed object
0 comments

William Rimmer based this sculpture of a mortally wounded man on works from ancient Greece and Rome. But its subject echoed the suffering of the United States on the eve of war. When the artist began work in January of 1861, six states had seceded from the Union, and the attack on Fort Sumter was just three months away. Rimmer worked as a doctor, and his critics at first accused him of casting the sculpture on a real human body. As the conflict wore on, however, they praised his representation of torment and suffering, relating it to the grim fate of Americans at war with one another. 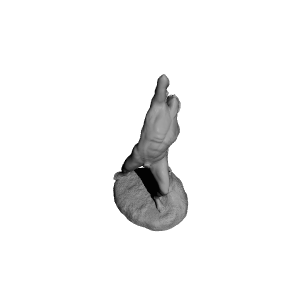 ×
2 collections where you can find The Falling Gladiator by 3DLirious