'The Falling Man' is included in 'The Gates of Hell', where he rather appears as a 'Climbing Man', attached to the lintel and the top of the left door. If Rodin actually planned this element to be fixed both to the left wing and the box-like tympanum above it, it would have been impossible to open the door. For this reason, Elsen assumes Rodin positioned this overlapping figure there only around 1886, after he realised the planned Museum of Decorative Arts would be not constructed and his 'Gates' would never serve as a proper doorway.

Audeh points to a formal similarity of 'The Falling Man' with Josef Anton Koch's representation of Inferno at the Casino Massimo in Rome. Although it could not be verified if Rodin actually was familiar with Koch's work, Audeh suggests Rodin's 'Falling Man' was derived from Dante's account about the Barrators (Traitors in Public Office) caught in a pitch a boiling tar, harrassed by devils with taloned forks, desperately trying to escape their torment.

This object is part of "Scan The World". Scan the World is a non-profit initiative introduced by MyMiniFactory, through which we are creating a digital archive of fully 3D printable sculptures, artworks and landmarks from across the globe for the public to access for free. Scan the World is an open source, community effort, if you have interesting items around you and would like to contribute, email stw@myminifactory.com to find out how you can help.
Show more Show less
License
Technical Information
More Information
Object Parts
Tags
Rodin
Remixes Add your Remix
Show more
Interesting objects for you
Show more 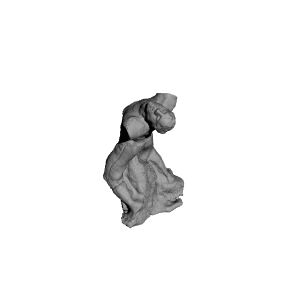