3D
Scan The World
1,258 views 44 downloads
Community Prints Add your picture
Be the first to share a picture of this printed object
0 comments

The inscription on General Tjahapimu's belt describes him as "Brother of the King, Father of the King." He is the father of Nectanebo II, who is named on the back pillar, and, according to a recent study, most probably brother of Nectanebo I. Flawless high polish and tensed muscles impart energy to the statue.
Tjahapimu figures in the political intrigues of the period. When Teos, the son and successor of Nectanebo I, undertook a military campaign in Asia, he left his uncle Tjahapimu in control of Egypt. Tjahapimu's own son accompanied the army, challenged Teos for its control, and, with his father's support in Egypt, seized the crown to become Nectanebo II. 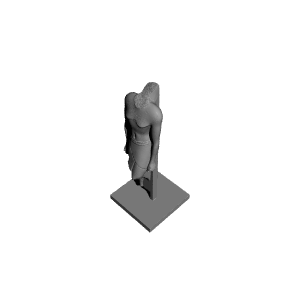