The goddess Isis in Copenhagen, Denmark

3D
Scan The World
3,407 views 172 downloads
Community Prints Add your picture
Be the first to share a picture of this printed object
0 comments

The goddess Isis in Copenhagen, Denmark

The goddess of fertility, Isis, was worshipped all over the Mediterranean, and this depiction of priestess belonging to her cult is from Rome. She is holding a pail for water for purification.

"Isis is a goddess from the polytheistic pantheon of Egypt. She was first worshiped in Ancient Egyptian religion, and later her worship spread throughout the Roman empire and the greater Greco-Roman world. Isis is still widely worshiped by many pagans today in diverse religious contexts; including a number of distinctpagan religions, the modern Goddess movement, and interfaith organizations such as the Fellowship of Isis. Isis was worshipped as the ideal mother and wife as well as the patroness of nature and magic. She was the friend of slaves, sinners, artisans and the downtrodden, but she also listened to the prayers of the wealthy, maidens, aristocrats and rulers. Isis is often depicted as the mother of Horus, the falcon-headed deity associated with king and kingship (although in some traditions Horus's mother was Hathor). Isis is also known as protector of the dead and goddess of children.

The name Isis means "Throne". Her headdress is a throne. As the personification of the throne, she was an important representation of the pharaoh's power. The pharaoh was depicted as her child, who sat on the throne she provided. Her cult was popular throughout Egypt, but her most important temples were at Behbeit El-Hagar in the Nile delta, and, beginning in the reign with Nectanebo I (380–362 BCE), on the island ofPhilae in Upper Egypt. In the typical form of her myth, Isis was the first daughter of Geb, god of the Earth, and Nut, goddess of the Sky, and she was born on the fourth intercalary day. She married her brother, Osiris, and she conceived Horus with him. Isis was instrumental in the resurrection of Osiris when he was murdered by Set. Using her magical skills, she restored his body to life after having gathered the body parts that had been strewn about the earth by Set.

This myth became very important during the Greco-Roman period. For example, it was believed that the Nile River flooded every year because of the tears of sorrow which Isis wept for Osiris. Osiris's death and rebirth was relived each year through rituals. The worship of Isis eventually spread throughout the Greco-Roman world, continuing until the suppression of paganism in the Christian era. The popular motif of Isis suckling her son Horus, however, lived on in a Christianized context as the popular image of Mary suckling her infant son Jesus from the fifth century onward." 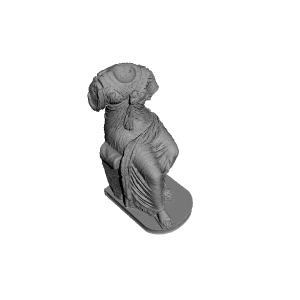 ×
0 collections where you can find The goddess Isis in Copenhagen, Denmark by geoffrey.marchal