The iguana, green iguana or Teyú ( Iguana iguana) is a large arboreal lizard from Central and South America . It is found from Mexico to northern Argentina , southern Brazil and Paraguay , as well as the Caribbean Islands and Florida . Are up to 2 m long from head to tail and can weigh over 15 kg. Iguana populations , have been significantly diminished in all latitudes of distribution, from the states of Sinaloa and Veracruz in Mexico to Brazil and Paraguay , due mainly to uncontrolled hunting and the gradual destruction of their habitat. In Colombia are hunted to extract the eggs and sell them as food in the streets. This practice has been banned due to the risk of extinguishing the species in the country. 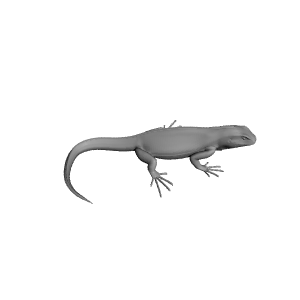 Printed 67% on our old Panospace. Impressive detail with the feet!