3D
360°
Featured Scan The World
3,469 views 608 downloads
8 collections
Community Prints Add your picture
Be the first to share a picture of this printed object
0 comments

This marble work, titled 'The Holy Hieronymus', is a work by Andrea Bregno (1418-1503). The Holy Hieronymus, most commonly known as St Jerome, was a Latin Catholic priest, confessor, theologian, and historian. He is best known for his translation of most of the Bible into Latin (the translation that became known as the Vulgate), and his commentaries on the Gospels.

The high-relief is of a very similar style to another sculpture in The SMK's collection depicting John the Baptist (DEP35). An extremely similar version of the Holy Hieronymus by the same artist can be found at The Tabernacle of Alexander VI in the Sacrisity of Rome, S. Maria del Popolo (1473); the relief of John the Baptist is also virtually identical to the sculpture of the same name at the Piccolomini altar in the Cathedral of Siena (1481-85).

The auction catalogue to where this work originates lists this and DEP35 as being part of a tombstone, and according to G. Carlo Sciolla in Arte Lombarda, XV, 1970, pp. 52 et seq. (Fig 2) in connection with the mention of Cardinal da Cusa's tomb in Rome, S. Pietro in Vincoli, considered the earliest work of the artist in Rome. 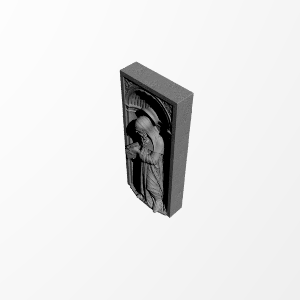 ×
8 collections where you can find The Holy Hieronymus, St. Jerome by SMK - Statens Museum for Kunst