3D
Scan The World
1,692 views 159 downloads
Community Prints Add your picture
Be the first to share a picture of this printed object
0 comments

This bust is a cast of a recently rediscovered colossal bust of Roma, made for the great collector and connoisseur Thomas Hope. The bust recently re-emerged from over a century of obscurity and recent research identifies it as the work of Vincenzo Pacetti.

Based upon an antique bust originally in the Borghese collection and now in the Louvre, this major neo-classical sculpture occupied a central position in the picture gallery in Hope's London house at Duchess Street and latterly in the sculpture gallery at the Deepdene in Surrey where it is seen in contemporary views of these innovative and influential interiors.

Almost certainly produced in Rome by the influential sculptor and restorer Vincenzo Pacetti sometime before 1808, the bust is a highly refined and remarkable preserved example of Italian neo-classicism. The stark design of the bust, with its severe attic profile and highly polished surface, offers a remarkable distillation of Hope's interest in the classical world: an interest that had enormous and wide-ranging impact upon contemporary European design.

Vincenzo Pacetti was an important sculptor, restorer and dealer, he sold and renovated ancient marbles for the British dealers in Rome and their Grand Tour patrons as well as for wealthy Roman families. Unlime some of the other sculpture-restorers of the period, such as Carlo Albacini, he was a respected modeller and carver who occupied important positions within the Roman art establishment becoming Principi of the Accademia di San Luca. Pacetti worked consistently for Prince Marcantonio V Borghese and this gave him access to the Borghese Roma, which he copied for Hope. 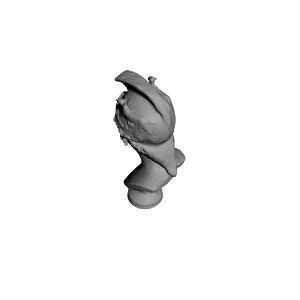