3D
360°
Scan The World
2,555 views 120 downloads
Community Prints Add your picture
Be the first to share a picture of this printed object
0 comments

Abika is the Goddess or yakshi worshipped on behalf of mothers and infants. She is seated with her child beneath a mango tree (associated with female fertility) and holds a mango stem. Her second child, her sacred vehicle the lion, and two worshippers appear below. She is also the helper of the 22nd Jain saviour, Neminatha, whose haloed figure can be seen sitting above.

This sculpture is a figure of the voluptuous Ambika, the Jain goddess worshipped on behalf of mothers and infants. Here she is shown with her child seated on a double lotus throne beneath a mango tree. She protects the infant with her left hand and holds a mango branch in her right. Her second child is shown on the lower frieze, reaching up to his mother.

The image and symbolism of the mango is associated with rounded female forms, especially breasts. This association is underscored by the similarity between the Sanskrit and Hindi words for ‘mango’ (‘amra’ and ‘amb, amba’) and ‘mother’. (‘amba’ and ‘amma’).

Ambika's vehicle, the lion, is seated alertly beneath the lotus throne. It is accompanied by the figures of two kneeling worshippers. They may be the donors who commissioned this sculpture.

Ambika is the attendant deity associated with Neminatha, the 22nd Jain 'tirthanakara' (founder of the religious community). His haloed form appears directly above her, flanked by attendants, garland bearers and celestial musicians. 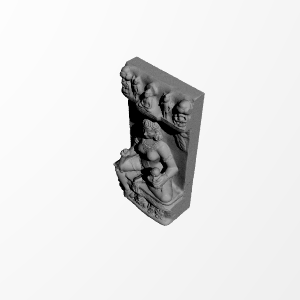